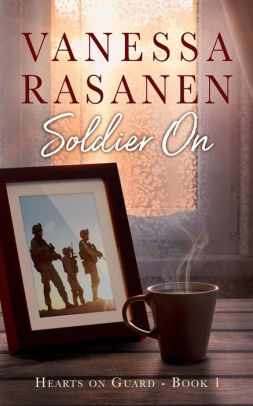 Meet Charlie Winters, a soldier in the Guard. He’s off to Afghanistan for a deployment, fighting for his country, when tragedy strikes. Dealing with tragedy makes his deployment all the worse. This is war; it’s to be expected, but it doesn’t make it any easier.

Meet Meg Winters, a wife who is on her own after her husband has been deployed. Things are rough, as to be expected, but there’s a secret that is plaguing her. What is she to do?

Charlie and Meg are both dealing with tragedies in their respective locations, all while trying to make sure their marriage doesn’t become a tragedy as well.

Vanessa Rasanen writes a captivating story of happiness and sadness, all within the same chapter. Deployments can bring out the best or worst in people, and for Charlie and Meg, you see the good, the bad, and the ugly. They find themselves at an impasse of sorts: how much are they willing to preserve their marriage during arguably one of the most difficult times they have faced up to date?

While a work of fiction, it gives a glimpse of what deployments can do for an individual and a marriage. When times are good, they’re really good. When times are bad, they’re really bad. Couples tend to grow distant or they tend to grow closer. In Soldier On, Meg and Charlie do both. The one thing keeping them together is their faith, even when it’s tested, and tested it is.

Solder On provides the reader with an emotional rollercoaster ride, covering happiness, sadness, despair, hope, highs and lows, and everything in between. With a well-written plot and character development, the reader can easily find themselves in Charlie’s Humvee while on patrol or Meg’s living room chatting over a cup of coffee.

Solider On is available for purchase October 30, 2018 on all major platforms listed below.

I just finished the book Warrior Monk by Raymond Keating. The book centers around a man by the name of Stephen Grant, a former CIA agent turned Lutheran pastor. He is the pastor of St. Mary’s Lutheran Church in Long Island. The current pope, Augustine I, is promoting a radical initiative, “A Public Mission of Mere Christianity.” It is truly a radical initiative – so radical that it has numerous people, groups and organizations coming out of the woodworks to protest. There are talks of assassinations, there are murders, there are conspiracies. At the heart of all this is Pr. Stephen Grant. His church experiences a major tragedy and is reeling from what has happened.  Pastor Grant is asked to assist with security for the pope. A Lutheran working for/with the pope? Yup, it happens! Is Grant a pastor and theologian or is he CIA agent for hire? Read it to find out for yourself!

From its inception on April 26, 1847, The Lutheran Church – Missouri Synod has emphasized the importance of linking together doctrine, practice, and mission. While this is an obvious, almost simplistic point, to confuse this issue will lead one to misunderstand the life of the Synod. Doctrine abstracted from life and unapplied in mission is merely an intellectual enterprise. Practice without a doctrinal and missional basis can degenerate into accommodation. Mission without doctrinal substance can lose the focus of the Gospel of Christ and lack practical impact. But bring doctrine, practice and mission together, and remarkable things can happen. Practicing substantive doctrine in mission can result in extraordinary unity and growth. (Emphasis added)

(Forward, At Home in the House of My Fathers)

One book that I’ve been eager to pick up is “At Home in the House My Fathers.” The book is subtitled “Presidential Sermons, Essays, Letters, and Addresses from the Missouri Synod’s Great Era of Unity and Growth.” That’s a mouthful to say the least.

The main editor of this book is Rev. Matthew Harrison, President of The Lutheran Church – Missouri Synod.

This book contains various sermons, essays, letters, and addresses from the first five presidents of The LCMS:

If you are interested in the historical writings of our Synod, this is probably the book for you.

I’m currently reading the book, “Warrior Monk” by Ray Keating. It is about a man named Stephen Grant who is a former CIA analyst turned Lutheran pastor. Yeah, it’s a hard one to imagine, but it makes for a good read.

I was amused by a conversation between Grant and Father McDermott, the local Roman Catholic priest:

After taking a hearty swig of his draft from Holland, Ron asked, “Do you have any plans, Stephen, of moving from Wittenberg to Rome that I don’t know about?

Stephen was surprised. “What? Become a Roman Catholic? Are you kidding?” That came out wrong. He recovered, needling his friend. “How many times do I have to tell you, Ron, we Lutherans are the real Catholics? We’ve reformed the Church, still waiting for you guys to catch up. After all, it’s been nearly 500 years.”

I thought it was humorous. Maybe it’s just me.

The Lutheran Study Bible is the 30th best selling Bible on Amazon, out of nearly 25,000 available under the category “Christian Bible.”

When my son Bryce was born, some dear friends from church brought over a gift for him.  Not wanting to leave Wesley out, they also brought him a gift too.  They gave him a book titled, Ten Friends Together.  The premise of the book is ten friends being picked up on a bus, one by one, on their way to a church mission fair.  At the end of the each page, it ends with “# friends, going to the fair.”  Wesley enjoys counting each number, which he can do, with the exception of the number 7.  When you get to friend 10, it’s a write-in with your name.  Wesley enjoys when you say his name.  A night can’t go by without reading this book.  It may have become his favorite book, next to Mickey Mouse, of course.

“Repentance is not a narrow gate through which a person has to squeeze. Repentance is something that God Himself must give to a person. Any kind of repentance that we produce ourselves is false and God is disgusted by it.”

As a church we have been known and are still known as people who are vitally concerned that the Word of God be preached in its truth and purity, that the entire program be based upon God’s holy, inspired, inerrant, and powerful Word.  The Word brings the church into being, and the Word is truly our rule and norm for faith and life in all the activities that we carry on.  We cannot yield one jot or tittle of God’s holy Word.  And the Word is the means for carrying out our mission.  It is all we have.  It is all we need.

We have emerged from a serious doctrinal controversy, in which we are probably the only Christian church in America and probably the only Lutheran Church in the world which seriously and earnestly confronted the issues raised by modern historical-critical methods of Biblical interpretation and honestly and forthrightly dealt with them…

The strength of our beloved Synod has always been a unique blend of concern for a pure doctrine which has brought about our strong confessional stance, coupled with the overwhelming desire to carry out the Great Commission. 1

1) Quoted from A Seminary in Crisis by Paul A. Zimmerman, available from Concordia Publishing House.

I received an email about a new work that Concordia Publishing House was working on.  This book was a required read during my seminary days (and it should be a yearly read for pastors regardless).  This translation was done in 1986 reproduced from the German edition of 1897.  Now CPH has come out with a new edition geared toward both pastors and laity.  I received it earlier this week and have been able to take the plastic off of it, but nothing more.  I’m looking forward to reading it soon.