You have to love a good flash mob, especially when they play great music.
HT: The RAsburry Patch
http://pl-mgroup-akamai.powerlineblog.com/admin/ed-assets/jw-player-plugin-for-wordpress/player/player.swf

That’s a line from Britney Spears’ new song, 3.  I heard it one day on my way back to church from lunch and had to look up the lyrics to make sure that’s what I was hearing.  The lyrics are available here if you want to read them.  Let’s take a look at a few of the lyrics that she has in her song, shall we?

“Livin’ in sin is the new thing.”  Is that true?  For many, they would say that that is a true statement.  Our society has unofficially adopted that statement, as sin is something that is no longer frowned upon, but rather, promoted.  Our television shows openly endorse casual sex, sex without consequences, living together before marriage, sex before marriage, and the list goes on.  Sin is no longer sin.  Sin is now a morally accepted thing.  Their is no stigma connected to it, it’s as Britney says, “the new thing.”  It’s in, it’s happening.  Let’s take a look at another set of lyrics from her.

Three is a charm
Two is not the same
I don’t see the harm
So are you game?

This smacks in the face the 6th Commandment, “You shall not commit adultery.”  What is she saying here?  A two-person relationship is so yesterday, that a relationship needs to be three-person?  And as she says, she doesn’t see the harm.  Yes, there is a harm in this.  There is a harm even in a two-person relationship when it is not in the confines which God has given to us, a man and a woman, committed to one another for life.  Does that mean a guy and girl dating is sinful?  No, but when that dating guy and girl start doing things reserved for husband and wife, then that is sinful.  What Britney says above is sinful.  Finally, the last set of lyrics.

What we do is innocent
Just for fun and nothin’ meant
If you don’t like the company
Let’s just do it you and me
You and me…
Or three….
Or four….
– On the floor!

All of this is innocent?  If you don’t like it, then it’s just the two of us, or three, or four?  That doesn’t sound like innocent fun, nor does it sound like it is acceptable to God’s Word.

The sad part about this song and it’s “theology” is that this is a “theology” accepted by society as a whole.  Now when I say that, I don’t mean that all morals have gone out the window, but we are moving further and further away from God and His Word.

Tonight, Gwen and I went to see The United States Army Field Band and Soldiers’ Chorus perform at the Cam-plex. It was sponsored by The Gillette News-Record and Cam-plex. Tickets were free, you just had to ask for them. This was a great show. It lasted about 2 hours, with a brief intermission. The show we saw tonight was made up of the Concert Band and the Soldiers’ Chorus. They did several pieces together, but mostly it was the Concert Band who performed.

One of the pieces the Concert Band performed was Gustav Holst‘s Second Suite for Military Band in F, op. 28b. This was the first piece which I played in college at the University of Indianapolis. It was good to hear something which was familiar to me. Another piece they played was “Con Brio” from Sonatina by Joseph Horovitz. I had no idea who the composer was or what the piece was. It turned out to be a jazz piece, featuring…wait for it…clarinet! Sergeant First Class Shannon Coleman was the soloist. She did an excellent job. With all of the high notes she hit, not once did she squeak the clarinet.

A piece that consisted of the Concert Band and the Soldiers’ Choir, with soloist, was “Toreador Song” from Carmen, featuring Staff Sergeant Mark Huseth as soloist. Seeing as I didn’t understand the words since they were not in English, SSG Huseth had a wonderful voice.

One of the best pieces was A Billy Joel Songbook. They did several songs of Billy Joel’s 4-decade career, featuring soloists from the Choir and used the rest of the Choir as back-up singers.

The part which The US Army Field Band enjoys the most is being able to play military songs. They played every anthem for the branches of the military: Navy, Air Force, Coast Guard, Marines, and their favorite, Army. It was nice to hear each branch’s anthem. The Commander and Conductor, Colonel Thomas H. Palmatier, asked each person who has served in those branches, those who have loved ones serving in those branches, or those who would like to show support for those branches, to stand during the appropriate anthem. During each anthem, he saluted the audience. It was nice to see a colonel saluting the people which he serves.

If you are able to see The US Army Field Band on tour, I highly recommend it. You will not be disappointed. To see if they are coming near you, check out their tour schedule.

This past Saturday, a number of us from Trinity went to Trinity Lutheran in Casper for a workshop about the Lutheran Service Book. The workshop was 3 hours long and good for everyone who attended. Everyone who attended received their own copy of LSB, along with a guide for using LSB. After the workshop, all 14 of us from Trinity went to Old Chicago Pizza for lunch. It took quite a while to get all 14 served. Our food was cold/lukewarm at best.

We’re all looking forward to Dec. 3, the first Sunday in Advent, when we will start using Lutheran Service Book for the first time. We’ll be using Divine Service One, the equivalent of Divine Service Two, Setting One out of Lutheran Worship which we currently use. Slowly, we’ll start expanding to other services, such as Divine Service Three, which is the old p. 15 from The Lutheran Hymnal. 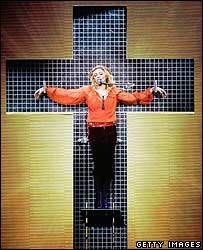 On Madonna’s latest world tour, “Confessions,” during her song Live to Tell, she is mounted onto a cross while wearing a crown of thorns. As far as she is concerned, there is nothing wrong with it.

“It is no different than a person wearing a cross. My performance is neither anti-Christian, sacrilegious or blasphemous…I believe in my heart that if Jesus were alive today he would be doing the same thing.”

I’m sorry, but I can’t see Jesus condoning the actions of Madonna. The crucifixion of Jesus was not for show; it provided mankind salvation following the fall into sin.

Her antics have caused protests outside of some of her venues. She says that this is helping raise awareness for AIDS and provides an opportunity for her audience to donate for that cause. In reality, she is making a mockery of everything that Christianity teaches: namely, the life, death, and resurrection of Jesus Christ. Christ’s crucifixion brought forgiveness of sins, life and salvation. Madonna’s “crucifixion” brought about $193.7 million.