“God became Man that man might become God!” This truth, cast in parallel phrases, summarized the Christian mystery to the Christians of old. It impinged itself deeply in their spirituality; in almost identical words the truth occurs frequently in the Fathers and in ancient liturgical texts. God assumed a human nature to effect man’s participation in the divine nature; God became a Child that we might become children of God. The birthday of Christ inaugurates our divine birth. With Christ we were born God’s children. God became Man! This truth is utterly incomprehensible to our puny human minds. That the eternal God, whom heaven and earth cannot contain, who bears the world in His hand as a nutshell, before whom a thousand years are as one day–that this eternal, omnipotent God should become Man! Would it not have proved His loving mercy had He appeared for a mere moment in the splendor of His majesty, amid thunder and lightening, as once on Sinai? No! Such would have shown far too little of His love and kindness. He wanted to be like us, to become a child of man, a poor child of poorest people. He wished to be born, in a cave, in a strange land, in hostile surroundings. Cold wind, hard straw, dumb animals–these were there to greet Him. The scene fills with amazement. What can we do, other than fall down in silence and adore! God put on the beggar’s garb, became a tiny, crying Babe in order to offer man His divinity. In paradise, a fallen angel had promised: “Eat of this fruit and you will be like God.” Man ate and became a prisoner of hell. On Christmas night another angel, the Church, stands before man, offers him a Food and says: “Eat of this and you will be like God.” For the divine Food, the Flesh of the incarnate Son of God, makes us “partakers of the divine nature.””

From Treasury of Daily Prayer, December 29

I have to say that I haven’t been in God’s Word as much as I should be in recent months.  I use a wonderful devotional entitled Treasury of Daily Prayer by Concordia Publishing House.  I don’t really have an excuse.  I could say that I’ve been busy, I’ve had too much going on, not enough time in a day, etc.  There really is no good excuse.  So tomorrow morning, I will get myself back into God’s Word.  What good is a pastor if he is not in God’s Word as much as he can be?  Here’s a wonderful quote from Bonhoeffer on the subject.

The life of the pastor completes itself in reading, meditation, prayer, and struggle.  The means is the word of Scripture with which everything begins and to which everything returns.  We read Scripture in order that our hearts may be moved.  It will lead us into prayer for the church, for brothers and sisters in the faith, for our work, and for our own soul.  Prayer leads us into the world in which we must keep the faith.  Where Scripture, prayer, and keeping the faith exist, temptation will always find its way in.  Temptation is the sign that our hearing, prayer, and faith have touched down in reality.  There is no escape from temptation except by giving ourselves to renewed reading and meditation.  So the circle is complete.  We will not often be permitted to see the fruits of our labors; but through the joy of community with brothers and sisters who offer us spiritual care, we become certain of the proclamation and the ministry. –Dietrich Bonhoeffer, Spiritual Care (Fortress Press, 1985), p. 69

This is what true repentance means.  Here a persons needs to hear something like this, “You are all of no account, whether you are obvious sinners or saints ‹in your own opinions›.  You have to become different from what you are now.  You have to act differently than you are now acting, whether you are as great, wise, powerful and holy as you can be.  Here no one is godly.”

But to this office of the Law, the New Testament immediately adds the consoling promise of grace through the Gospel.  This must be believed.  As Christ declares, “Repent and believe in the gospel” (Mark 1:15).  That is, become different, act differently, and believe My promise.  John the Baptist (preceeding Christ) is called a preacher of repentance, but this is for the forgiveness of sins.  That is, John was accuse all and convict them of being sinners.  This is so they can know what they are before God and acknowledge that they are lost.  So they can be prepared for the Lord [Mark 1:3] to receive grace and to expect and accept from Him the forgiveness of sins.  This is what Christ Himself says, “Repentance and forgiveness of sins should be proclaimed in [My] name to all nations” (Luke 24:47). 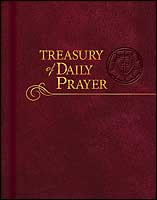 Here is a nice little gem from Martin Luther which comes from Treasury of Daily Prayer.

He is not righteous who does much, but he who, without work, believes much in Christ.

For the righteousness of God is not acquired by means of acts frequently repeated, as Aristotle taught, but it is imparted by faith, for “He who through faith is righteous shall live” (Rom. 1[:17]), and “Man believes with his heart and so is justified” (Rom. 10[:10]).  Therefore I wish to have the words “without work” understood in the following manner: Not that the righteous person does nothing, but that his works do not make him righteous, rather that his righteousness creates works.  For grace and faith are infused without work works.  After they have been imparted the works follow.  Thus Rom. 3[:20] states, “No human being will be justified in His sight by works of the law,” and, “For we hold that man is justified by faith apart from works of law” (Rom. 3[:28]).  In other words, works contribute nothing to justification.  Therefore man knows that works which he does by such faith are not his but God’s.  For this reason he does not seek to become justified or glorified through them, but seeks God.  His justification by faith in Christ is sufficient to him.  Christ is his wisdom, righteousness, etc., as I Cor. 1[:30] has it, that he himself may be Christ’s vessel and instrument.