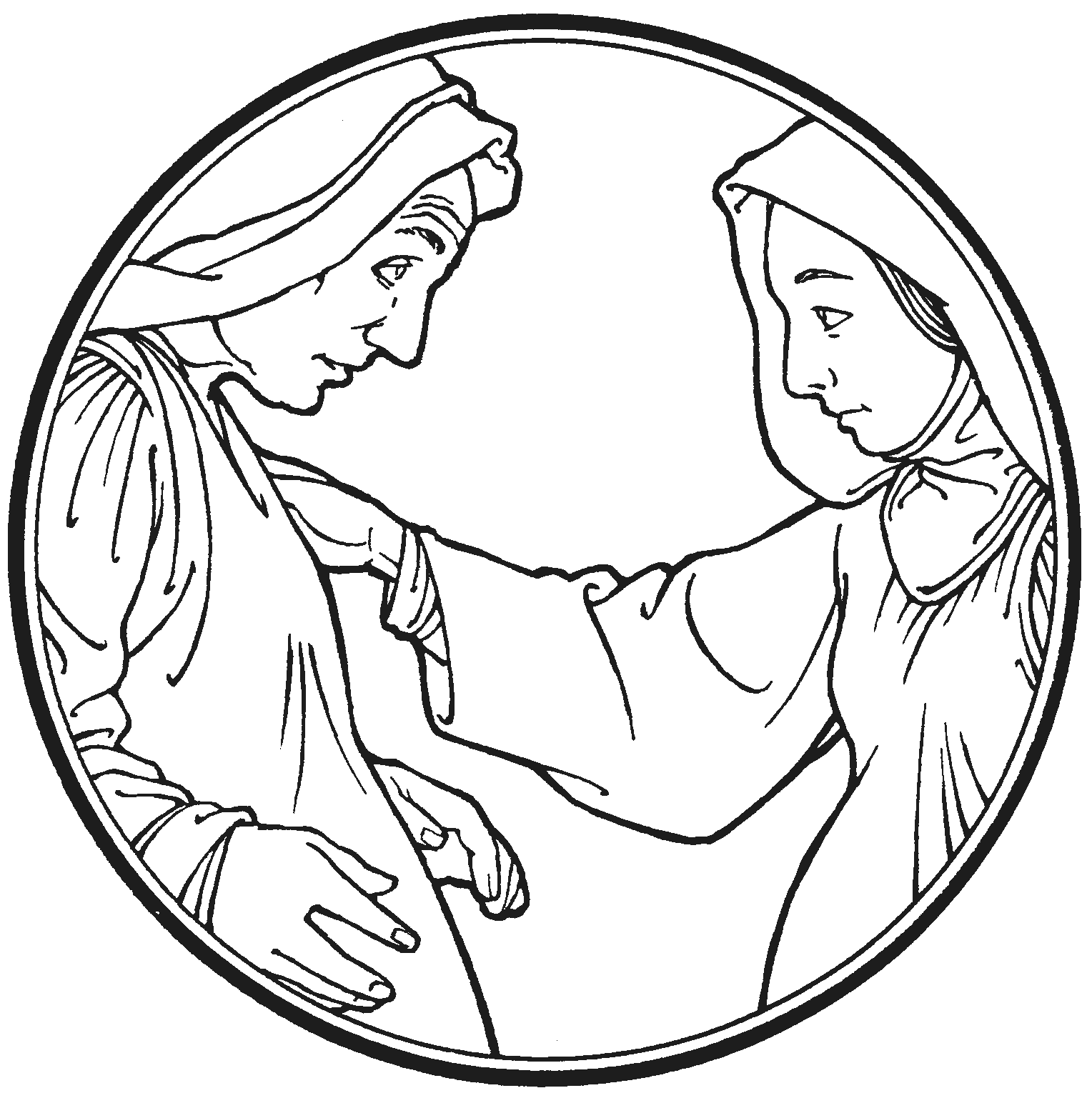 Things are beginning to get serious with the promise of God’s Messiah. To date, an angel has appeared to Zechariah telling him of the birth of John and his role as the forerunner to the Messiah. Zechariah was struck mute until John was born, thus declaring his name John as directed by Gabriel. During that same time, while Elizabeth was six months pregnant, the angel Gabriel appeared to a young girl named Mary telling her that she will be with child and that the child will be called the Son of the Most High. It would almost seem that what God had promised so long ago was now beginning to come together.

Again, we return to Luke’s Gospel and the next part of the story – Mary travelling to Judah to see Elizabeth. Everything to date has seemed incredible to all parties, to Zechariah and Elizabeth that they would have a child at such old ages, that Mary, a virgin, would have a Son and that Son would be God in the flesh. To say that this was a shock to everyone was an understatement, and yet, with a little coaxing for some, they all came to believe what the angel Gabriel had declared.

Again, all this from an outsider’s perspective seems to be too incredible to believe. But for those who believe, we recognize that, yes, this is incredible – incredible that the promise of God was being fulfilled as God had said.

As we read this account, we have to wonder why Luke makes a point to show John leaping in the womb in front of Mary. Why should this be a question? Isaiah records, “By myself I have sworn; from my mouth has gone out in righteousness a word that shall not return: ‘To me every knee shall bow, every tongue shall swear allegiance.’” Could it be that being in the presence of Jesus, John showed the proper respect he could by leaping in the womb? In talking about Jesus and His act of humility, Paul says, “Therefore God has highly exalted him and bestowed on him the name that is above every name, so that at the name of Jesus every knee should bow, in heaven and on earth and under the earth, and every tongue confess that Jesus Christ is Lord, to the glory of God the Father.”

Elizabeth responds in a way that is fitting with all that has taken place up to this point in God’s fulfillment of the promise: “Blessed are you among women, and blessed is the fruit of your womb!” The fruit of Mary’s womb could not be more blessed. That fruit is God in the flesh, the promise fulfilled.

What clearly stands out is the presence of Jesus. Everything that happens is a response to the presence of God in the flesh – the baby inside Mary. The presence of the Lord causes a physical response by the child John in Elizabeth’s womb; the praising of Mary by Elizabeth, and Mary’s beautiful hymn that comes just a few verses later. Elizabeth proclaims Jesus in the womb of Mary to be cause of her blessedness, just as Christ in His Church is the source of her every blessing. Blessedness is a condition for which God alone is responsible. Mary’s blessedness is the result of an act of divine grace which God gives to her as a gift. Mary is blessed because of the presence of Christ in her just as the Church is blessed because Christ dwells in her.

What a feeling to be called blessed by God! It should be noted that Mary is blessed not because of what she has done, but rather what God has done for her. She acknowledges that she is indeed blessed moments later in her song, the Magnificat, but she is not blessed, however, because of who she is. In her hymn, she notes the humble estate of God’s servant. She calls God her Savior because she is a sinful human being like everyone else is, and she knows she is in need of saving. She makes it abundantly clear that it is God who has done great things for her, and so she gives all glory to Him.

What we have to understand is that we as the Church are not blessed because of who we are. Who are we? We are dead in our trespasses and sins. We deserve God’s eternal punishment and death. And yet given who we are, we are blessed. Our blessedness consists in the presence of the incarnate Christ who is the ultimate source of every true blessing. Jesus entered the womb of Mary so that He could be born, live a sinless life and ultimately die on the cross for our sins, only to rise again triumphantly three days later. It is through the death of Christ that takes away our sins that separate us from God and now brings us back into God’s presence now and forevermore.

That happens in our Baptism where we are clothed with the righteousness of Christ, forever replacing our sinfulness in the Father’s eyes so that all He sees is the perfection of His Son. That same presence is realized also in the true body and blood of Jesus Christ in His Holy Supper where our Lord comes to us with His gifts of forgiveness of sins, life, and salvation.

Being blessed by God is received through faith in the promise of the Child whom Mary bears in her womb. Being blessed by God is received through what God does for us in Christ and not through what we do for ourselves. That is the whole theme behind Mary’s song and it is the whole theme for Christianity with regards to our salvation. There is no chance of salvation by ourselves. Adam and Eve failed to keep God’s Word as do we. Only by keeping God’s Word perfectly can we achieve salvation. That is not something that we can do, no matter how hard we try, no matter how much we think we can. Our sole means of salvation comes from the Child that Mary carries. Mary understands God’s grace and finds her peace in the promise of Gabriel’s message.

Just as Mary accepted this message of the Savior through faith, so do we in the Church accept this by faith, faith that comes from the Holy Spirit. Through the Holy Spirit, we understand and respond in faith to the continued proclamation that our Lord Jesus Christ, who took on human flesh and dwelt among us, is our promised redemption and salvation.

And so here we are. Mary will give birth to her first-born Son. He will grow and become a man, a man who had an appointment with a cross. As God stepped down from heaven into the womb of the Virgin, He took His first step to the cross. The cross is the reason He took up human flesh in the first place. He came to be Mary’s Savior, and not only her Savior, but also the Savior of all mankind. For as He took up human flesh He also humbled Himself under the Law in order to fulfill the Law in our place. Then as He suffered on the cross, He took up the wrath of God that we all earned with our sin. This is the way in which He is Mary’s Savior and the Savior of us all.

We are, on account of Christ, exactly what is attributed to Mary: blessed; blessed for Christ’s sake, blessed for we are in Christ. In Jesus’ name, amen. Now the peace of God that passes all understanding keep your hearts and minds through faith in Christ Jesus, amen.