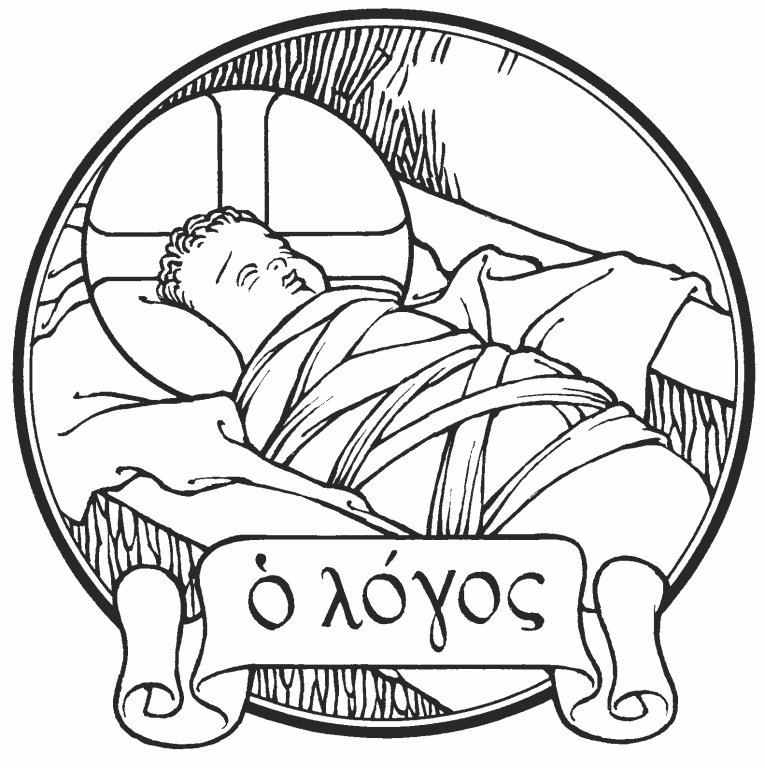 This is the most important of all the Gospels of the Church Year, right up there with the birth narrative from Luke’s Gospel. The major theme that John brings out throughout the Gospel account is very much related to today’s celebration of the birth of the Christ child. This theme emphasizes the fact that the little baby whose birth we celebrate on this day, the little baby lying in the manger, is God in the flesh. The little human baby who looks like any other human baby is, in fact, the Lord through whom all things were created.

The Evangelist John, who by divine inspiration of the Holy Spirit penned the words of the Gospel reading appointed for this day, included no account of the events surrounding the birth of Jesus Christ. In the opening verses of John’s Gospel, one does not hear of Joseph and the Virgin Mary being visited by the angels. Nor does one hear of the events that took place in Palestine in order to fulfill the prophetic Scriptures of the Old Testament. No, John begins his Gospel in a time before the nativity of Christ and even of John the Baptist, for that matter. In fact, the opening words of the Gospel of John are set in a time that precedes the genesis of the universe itself; a time when there was only the Word.

“In the beginning was the Word, and the Word was with God, and the Word was God.” In the very first verse of his Gospel, John cuts to the chase in revealing the identity of the Child who lay in the manger at Bethlehem. He takes his hearers back to creation, and reveals that the Word who was with God was God. He declares that Jesus, the Christ, or Anointed One of God, is the everlasting Son, who was with the Father from all eternity. And John further declares in verse 3 that this same Jesus is the Creator of all things. The little Lord Jesus who lay down his sweet head on the hay in the manger is in fact the Almighty God who fashioned and created the heavens and the earth! The little Child, to whom the wise men brought gold, frankincense, and myrrh in that humble stable at Bethlehem, is the Lord God of Israel, who had chosen the Israelites as his people.

The Word became flesh and dwelt among us, and we beheld His glory, the glory as of the only begotten of the Father, full of grace and truth. You can’t get nearer than that. The Word-who was in the beginning with God, who was God, and through whom all things were made-became flesh. Without giving up an ounce of His divinity, He also became fully human, conceived by the Holy Ghost and born of the Virgin Mary, to dwell with us. “Dwelt,” says the English. St. John says it better in the Greek: “The Word became flesh and tabernacled among us” is what he says. The Lord had been present with His people in the tabernacle for centuries; now He was flesh and blood, living embodied among His people.

The Word became flesh – not just to be nearer, but to fulfill the Word. Long ago, God had promised that the Seed of the woman would be born to save; now the Word was flesh for the salvation of all nations. He preached, He taught, He fed, He healed. He fulfilled prophecy after prophecy, proving beyond the shadow of a doubt that He was in fact the Savior, the Son of God. As He had throughout the centuries, God had come near to save His people.

Therefore on Calvary, man tries to silence the Word once for all. Despite their best efforts of rebellion, rejection, betrayal and scorn, the Lord rises again on the third day. And despite the same, He does rise with a vengeance, but with salvation. He restores His disciples, forgives them for their sins; then He sends them out to all nations, to baptize and teach-to declare His salvation. The Word sends them to proclaim the Word, and He does so with this promise to them and to all His people: “Lo, I am with you always, even to the end of the age.”

In other words, God still comes near to you.

Despite a world that is hell-bent on rejecting the Savior, the Word made flesh still comes to you. We speak, of course, of His means of grace: The Savior promises that He is present with you, really present, by His Word and Sacraments of Holy Baptism and Holy Communion. This has been the theme of the sermons throughout Advent and Christmas: The Word made flesh is not far away from you. Jesus is present with you in His means of grace, freely giving you salvation.

Jesus is present with you in His means of grace, freely giving you salvation. This is an awesome Scriptural truth. The Lord is consistently faithful to His people, as He has been since Adam and Eve. He still draws near to save, despite so much sin and utter rebellion in the world today. He still comes, though so many do not even pretend to receive Him. In His faithfulness, the Lord does not abandon this sinful world. Hear this remarkable statement of salvation: As many as receive Him, to them He gives the right to become the children of God, to those who believe in His name. You are now His children: Not by blood or genetic heritage; nor by your plans, works or will; but by His work of saving you on the cross.

This the miracle in which we constantly rejoice: The Word made flesh still comes near to save-save us by His blood, by His work, by His sacrifice, His grace. The Lord still comes near.

“In the beginning was the Word.” That’s how this sermon began, with the Word with God, being God, creating all things-a bit difficult to grasp. But here is the joy that you have: That almighty Word became flesh to dwell among His people, to go to the cross for you. From the cross, He descended into hell, rose again, and ascended into heaven. His travels for the sake of forgiveness are not done, for He comes near to you. And drawing near, the Word made flesh proclaims His Word that you are forgiven for all of your sins. In Jesus’’ name, amen. Now the peace of God that passes all understanding keep your hearts and minds through faith in Christ Jesus, amen.