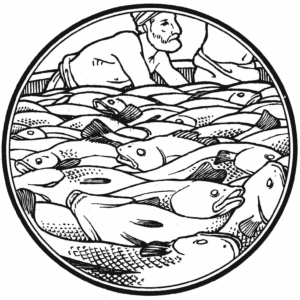 As Luke begins this account of Jesus, He has finally left the building, that is, we no longer find Jesus at the synagogue. Today, “he was standing by the lake of Gennesaret.”Though Jesus was no longer in the synagogues with the people gathered for worship, Jesus still finds Himself surrounded by a crowd nonetheless. The reason for their gathering around Jesus: “to hear the word of God.”While Jesus is still the relatively new preacher on the block, the people are flocking to Jesus because His Word had authority. They have heard Him, they have seen Him perform a number of miracles at this point, including casting out a demon and healing various others of their sickness and exorcising more possessed by demons, and yet, they still come to Jesus. Is it because of what He says? Is it because of what He does? Is it because He is not like the other preachers of the day? Likely, it is a combination of all of the above.

While standing on the shore, Jesus saw two boats, one belonging to Simon, whose mother-in-law He recently healed. Jesus got into one of the boats and told Simon “Put out into the deep and let down your nets for a catch.”At this point, it is probably during the early morning hours and not the prime time for fishing, since it was easiest to catch the fish during the late hours when they were closer to the top of the water. Because of that, Simon responds, “Master, we toiled all night and took nothing! But at your word I will let down the nets.”

Notice how Simon, better known as Peter, responds. He calls Jesus “Master.” After seeing what Jesus had recently done with the demon-possessed man and his mother-in-law, he recognizes Jesus as someone special, someone with authority, and rightly so. What Jesus has done commands a sense of awe and respect from Simon Peter and he aptly shows it by how he addresses Jesus.

With what has taken place up until now, one can only imagine if they will catch fish at all. While Simon Peter is doubtful, he does as his Master directs. “And when they had done this, they enclosed a large number of fish, and their nets were breaking.”This wasn’t because they decided to throw their nets onto the other side of the boat. Surely if you didn’t catch fish in one location, you would move on. Surely if you didn’t catch fish from one side of the boat, you would try another. They caught the fish at Jesus’ command. Performing a simple miracle such as catching a bursting net full of fish was indeed helpful to these men, for fishing was their vocation. No fish means no money. No money means not being able to support yourself. Now, through this miraculous catch of fish, they had an ample supply of fish that would have likely earned for them a generous amount of money.

That is not what happened. There were no shouts of joy over the catch. The men in the boat didn’t begin to count up their share of the potential money. Rather, Simon Peter “fell down at Jesus’ knees, saying, “Depart from me, for I am a sinful man, O Lord.””He saw what Jesus had done and had determined that he was not worthy to be in the presence of Jesus, for he was a sinner.

If there is anything that you should be saying right now, it should be the same words that Simon Peter cried out: “Depart from me, for I am a sinful man, O Lord.”What right do you have to stand in the presence of Jesus? What have you done to earn the privilege of being called a child of God? What makes you worthy for the sinless Son of God to lay down His life in order to give you life? You are not worthy of what Jesus comes to do for you; you never have been and you never will be, and yet, Jesus comes for you anyways. He comes to lay down His life so you may have life. He comes to forgive your sins so that you may be declared sinless before your heavenly Father. The last thing that sinners want is Jesus to be hanging around, because his coming should terrify us. No matter what trouble we’re in, this is our most profound and pressing concern: Jesus should judge us because of our sins.

Jesus looks at Peter in his sin and says, “Do not be afraid.”But what does that mean for Peter? More importantly, what do it mean for me? It means don’t fear. There is nothing to be afraid of. Jesus tells us that He is not angry, that He did not come to judge you, to condemn you, or to destroy you. He says that He’ll take care of your sin, that He’ll make a way for you to be alive and live with Him forever. To Peter and to us, Jesus says, “Don’t be afraid.” This is the absolution, the forgiveness of sins, the purest and sweetest Gospel. When the knowledge of our sin and God’s holiness pushes out every other fear so that we stand terrified of God’s wrath, and only God’s wrath, when we at last say, “God, I fear you.” God says to us, “I am nothing to be afraid of. Look, here is my Son, crucified for you.”

And then He says, “Look, here is my servant Peter, sent to preach you the Good News. Look, here is My servant John, James, Paul, sent to you as witnesses of the death and resurrection of Jesus. Look, here is Moses, Abraham, David, Isaiah, preachers of My name and kindness. And look, here is your pastor, sent in My name to bring the Good News to you, to forgive your sins, to baptize you, to put the body and blood of Jesus into your mouth.”

Just as Jesus called Peter, James, and John to be fishers of men, so too has God called you – called to be His disciple, called to hear the Word of God and believe by the Holy Spirit, called to share that Word of God with all, that they too may hear and believe.

We rejoice in the calling of St. Peter because we see in this calling how Jesus still loves us. He not only dies for you, but He calls Peter and his apostles and his pastors so that you would know it, believe it, rejoice in it, and have eternal life in His name. In Jesus’ name, amen. Now the peace of God that passes all understanding, keep your hearts and minds through faith in Christ Jesus, amen.